NSRC helps to build network infrastructure and the human technical capacity to manage it in Internet ecosystems around the world.

For more than thirty years, NSRC has helped develop Internet infrastructure and network operations communities in 130+ countries, assisted thousands of universities, facilitated the deployment of dozens of Internet eXchange Points (IXPs) in all world regions, and provided technical guidance to dozens of country-code Top-Level Domain (ccTLD) registries for stable, secure DNS operations in cooperation with the Internet Corporation for Assigned Names and Numbers (ICANN). 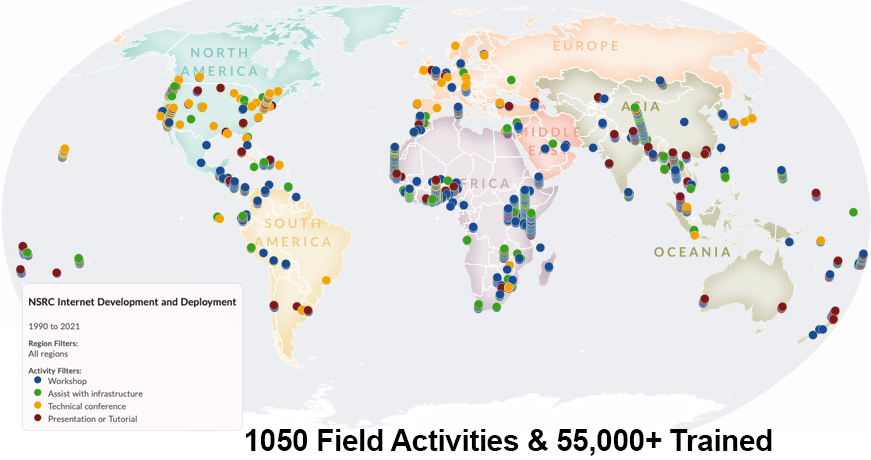 Community building is the foundation on which NSRC is built and the reason why so many NSRC staff and contractors are passionate about the work we do. By working as a request-driven group that responds to those asking for assistance and encouraging others to stand on their own and work with others to support them in the same way, communities are built. This is a long-term and lasting impact and it is one of the most gratifying outcomes that result from the work NSRC has done over the years. 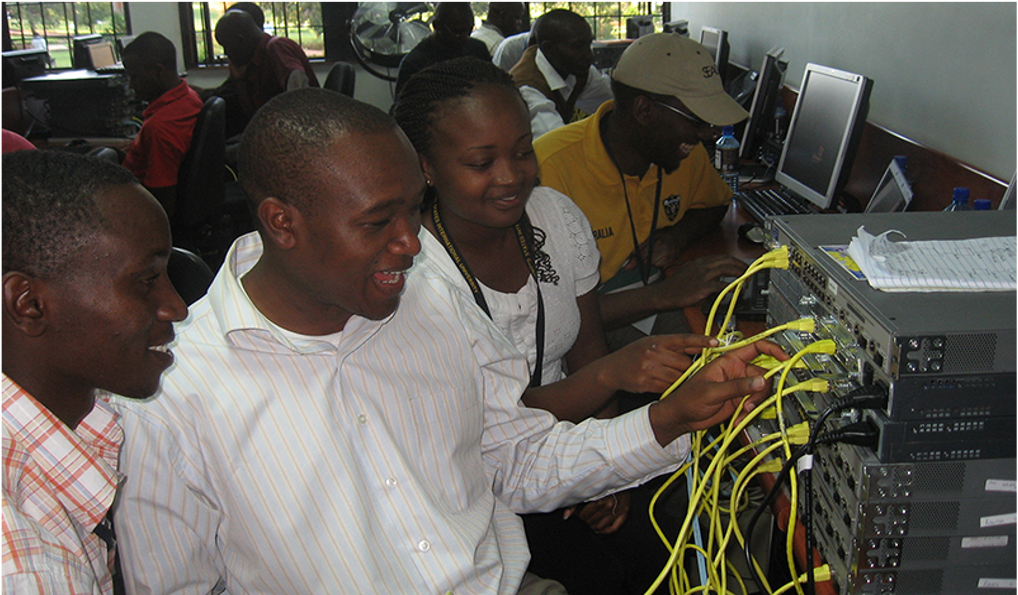 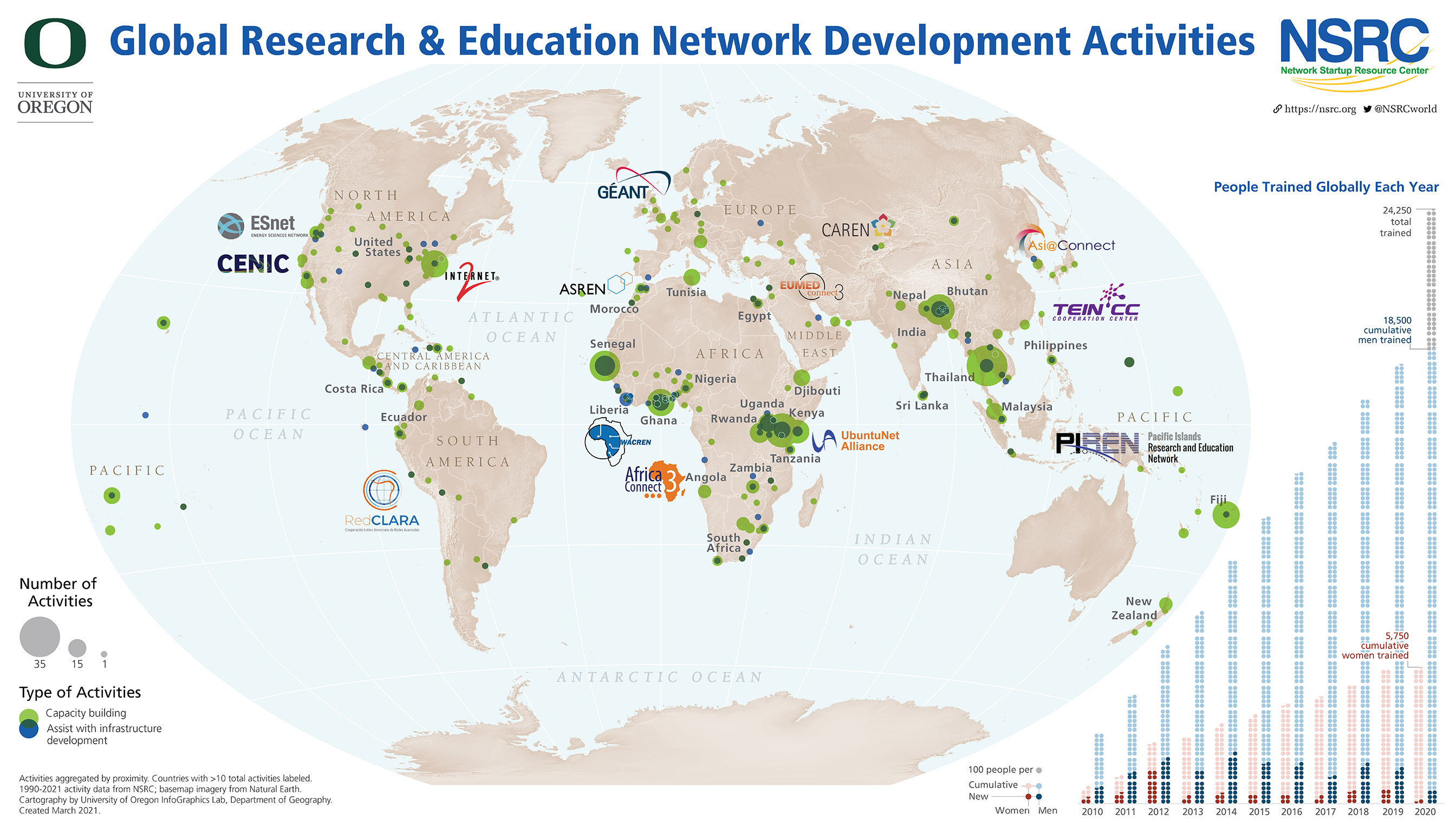 Who is the NSRC? 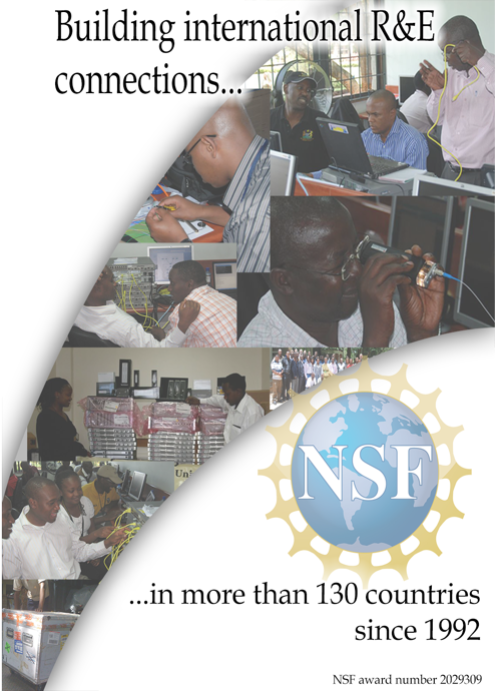 NSRC was started by Randy Bush and John Klensin in late 1980s while establishing some of the first email systems (FidoNet and/or UUCP) in many countries. Throughout the 1990s, the founders of the Network Startup Resource Center (NSRC) assisted dozens of countries in Asia, Africa, Latin America-Caribbean, the Middle East and Pacific building computer networking infrastructure and establishing their first communications links to the global Internet. In 1992 NSRC was funded by the National Science Foundation (award #: NCR-9616597) to provide technical assistance to organizations setting up new computer networks to connect scientists engaged in international research and education. During the initial years NSRC was affiliated with a United Nations University project at Massachusetts Institute of Technology (MIT) and assisted with fueling the internationalization of the Internet backbone at the time – the National Science Foundation Network (NSFNET). The NSRC group moved its home base of operations to the University of Oregon in 1996.

Thank you to all of NSRC's sponsors and supporters who invest in the development of open, interoperable networks and human resources to enable affordable Internet access.

Through hands-on, lab-based curricula and a train-the-trainers approach, NSRC has provided technical skills and knowledge transfer to thousands of network engineers operating thousands of TCP/IP networks in all regions of the world, thereby enhancing the global Internet ecosystem.

Some alumni of NSRC's training programs are longtime collaborators and Internet pioneers in their countries who have shifted to careers in their national governments, including important roles such as Minister of Science and Technology, Minister of Communications, Minister of Higher Education, Regulator of the national telecommunications agency, and other prominent leadership roles of public service in their countries. NSRC maintains good working relationships with many of them for technical and policy discussions, putting special emphasis on support for scientific institutions.