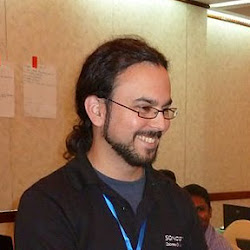 Carlos Vicente works as a Network Engineer for the University of Oregon and Trainer with the Network Startup Resource Center (NSRC). Since 1996 Carlos has been involved in building networks and deploying emerging technologies in the educational sector in Latin America and the USA. Carlos works regularly with the Escuela Latinoamericana de Redes and various network operator groups to provide technical training about network design, routing, switching, and network management.

Before joining the University of Oregon in 2002, Carlos obtained his Master's degree from the Universidad Politecnica de Catalunya in Barcelona, Spain. During this time he also worked as a Network Engineer for Loop Telecom, a Spanish Internet service provider. Before moving to Spain, he received his bachelor's degree in Systems Engineering from the Instituto TecnolÃ³gico de Santo Domingo. He helped build his university's campus network from scratch and was involved in the creation and operation of the first Research and Education Network in the Dominican Republic (RUDAC).

On his free time Carlos enjoys listening to music and playing the guitar, reading, hiking and camping, eating good food, driking good coffee and spending time with his wife and two daughters.