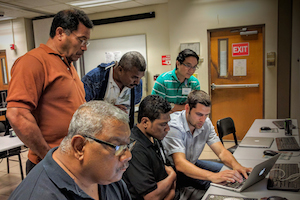 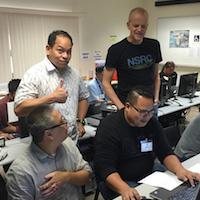 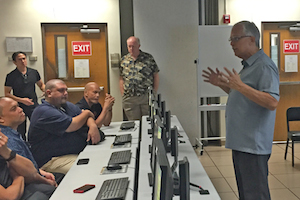 After the workshop finished the same group of trainers provided direct engineering assistance to the university for several days. The engineering team in conjunction with UoG network engineers brought up new fiber optic connections from the core to the student dorms and the Marine Laboratory. Based upon the work done during the engineering assistance project the UoG staff extended network connections to the Water and Environmental Research Institute of the Western Pacific (WERI), which seeks solutions for the management of freshwater resources in the surrounding islands. Before completing the UoG project, peering partners GTA Teleguam and DOCOMO Pacific began announcing the new prefix for the registered autonomous system number 395400.

During this activity David Teach provided operational knowledge from his experience as a Network Engineer for the University of Oregon. Guam came as the second hands-on opportunity for Teach to assist research & education networks in an engineering capacity. A trip with the NSRC in 2015 to the Charles Darwin Research Station in the Galapagos included Teach working with the local Ecuadorian team to help upgrade the research network infrastructure and services for visiting scientists who utilize the research station.

“This past July 2016, the Network Startup Resource Center sent their top professionals in information technology and research and education networking to conduct a workshop on best practices in campus network design. Over the course of the week-long workshop, technical staff from the local educational institutes on Guam and the surrounding Pacific islands (Palau, the Marshall Islands, the Federated States of Micronesia, and the Northern Marianas Islands) were brought up to speed on current networking best practices. Hands-on group exercises reinforced the concepts taught while developing the camaraderie and collaborative spirit that is sorely needed in the Pacific region. Within the next few years, with the continuing help of the NSRC, the NSF, Internet2, the University of Oregon, and the University of Hawaii, I predict the island of Guam will become a regional hub for high-speed research and education networking (REN). The IT team at the University of Guam will push forward to make this happen and we will continue to work with the NSRC and other REN leaders to mentor us and point us in the right direction.”
--Rommel Hidalgo, Chief Information Officer, University of Guam

Telecommunications costs, streamlining network design and preparing for the possibility of additional undersea fiber optic cable spurs being pulled to the Pacific are only a few of the issues faced by the University of Guam. The island of Guam and many of the surrounding islands nations are poised as a digital frontier with connectivity in the past being limited to satellite links. The new fiber optic connections stand to change how researchers share data gathered in the South Pacific.